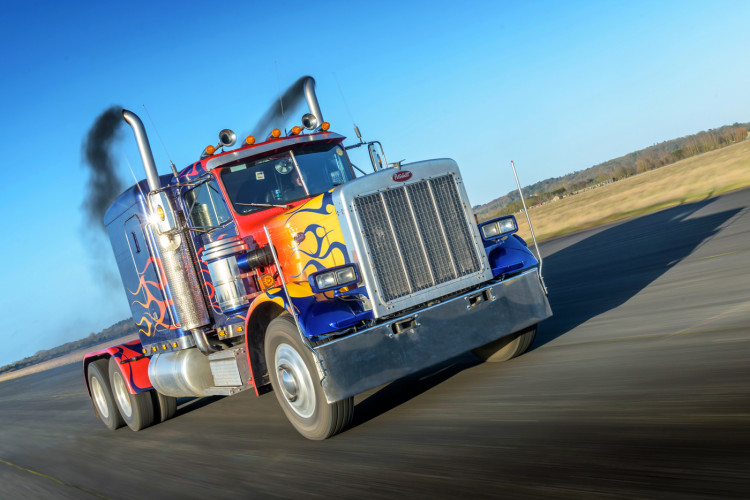 Peterbilt was founded in 1939, producing American trucks. This, the 379, was Peterbilt's flagship truck from 1987 until the 2007 model year, maintaining the nameplate's signature long-nose styling.

When it came to create the first live-action "Transformers" movie, the most important characterization was certainly that of 'Optimus Prime'. An entire team of artists and illustrators worked tirelessly, drawing potential trucks and cars, trying to zero in on just the right look for each robot/vehicle. When the film's production designer showed Michael Bay a photo of the enormous tractor trailer, the director was immediately taken by the lines and size of the truck, even though he know he would face intense criticism for his choice, in the same way he did for selecting a GM Camaro in place of the original VW Beetle that was known as the beloved robot Bumblebee. Both of Bay's picks ended up enthralling new audiences as well as diehard fans of the sci-fi series. The more aggressive truck, was also used as Bay's tip-of-the-hat to Steven Spielberg's 1971 film, "Duel."

Our Optimus Prime truck driving sessions give you the chance to take a 600bhp, 18-gear Peterbilt 379 for a spin around your choice locations from several around the UK. With a typical Transformers-style war cry of ‘Charge!’ it’s time for you to lead the next Autobot offensive at the wheel of this American beauty.

Made Famous By - Was one of the star's of the 'Transformers' movie franchise.